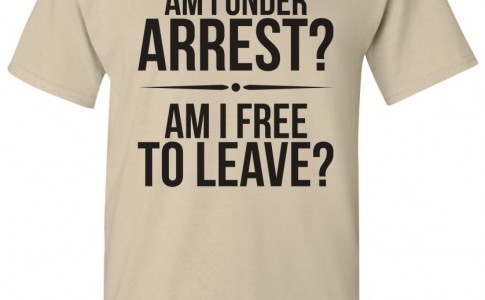 If you are free to leave, why would you stay? I wouldn’t. Most people do.

I’ve spent the last couple of days thinking long-and-hard about the way “regular” people deal with the police. I have developed a genuine interest in figuring out why people have no problem questioning any intrusion to their lives… except when it comes to personal dealings with the police. For some reason you will go to great lengths to keep Wal-Mart out of the other side of your town but you have no problem letting the police in your car? I don’t get it. I think I’ve made it plenty clear that how you interact with the police has nothing to do with being guilty or innocent.

Perplexed as I may be, I’ve tried to figure it out. My hunch is that it has to do with the early perception children form of the police. Children are taught, rightly so, that the police help us when we need it. Approached by a stranger? Find the police. Bad car accident on the road? The police show up to help. With D.A.R.E. programs and school liaison officers becoming commonplace, it’s only natural to develop an affinity towards the helpful police. Maybe, then, people don’t want to disappoint people they see as potentially helpful to someone? I’m not sure.

Before I get any more nasty email, I’m not knocking the police. They can’t believe the things people willingly do, either. Don’t believe me? Ask a cop. The police know that most people will let them do whatever they’d like, and those police will use it to their advantage. They are the educated ones.

On that note, today I offer a little counter-education. There are three things that people hardly ever say to the police. Three powerful things. Three things rooted in the Bill of Rights. Three things that may not be specifically mentioned, but that James Madison would want you to know.

Three things you can say (that the police really don’t expect to hear):

1. “Am I free to leave?”
Without getting into a very long legal explanation, this simple question may help trigger a lot of legal issues. If you are not free to leave, your interaction with the police is not “consensual”. It may not be a full-on arrest, but it is not consensual. If you are ever unsure, ask. Don’t be surprised if you get an indirect or incomplete answer back, though. Police don’t get asked this very often, and it can actually be a difficult question to answer from their end. Also, they may be worried that you will leave. Insist on clarification, though. If you are not free to leave, you need to know.

Which brings up another question that torments me. If you are free to leave, why would you stay? I wouldn’t. Most people do.

2. “I would like to speak with an attorney before I talk to you.”  I know what you are thinking. You’re thinking, “I’m never going to get interrogated for murder, so why do I care?” Traffic court is filled with people who thought like this. In court, though, they want their day. People want trials. People don’t believe they were speeding. People know that radar is inaccurate. People aren’t buying that they were clocked at 20 MPH over the limit.

People don’t know, though, that traffic court is filled with magic. I’m not talking slight-of-hand or even Jedi mind-trick magic. I’m talking Carnac magic. Anybody sitting in traffic court for a couple of speeding trials has this magic. I have it. You can get it. It’s the magic that helps us know what the police officer says before he even says it:

Seasoned Officer: “…after the radar readout was 76 in a posted 55 MPH zone, I stopped the vehicle.”

Incredibly Skilled Prosecutor: “What happened next?

Seasoned Officer: “I approached the vehicle, asked the driver for license and insurance, and asked her if she knew why I pulled her over.”

Incredibly Skilled Prosecutor: “Then what happened?”

Seasoned Officer: “She admit that she was speeding, but said that she was only going 6 miles-per-hour over the speed limit. She said she was going with the flow of traffic, and could not have been going that fast…”

If the judge believes the driver of the vehicle actually said that, everything else at trial is a lot less important. Confessions are the most damning evidence possible. If the driver had, instead, told the officer that she didn’t want to talk about the stop without consulting an attorney first, she would have a better chance at trial. If you’re going to go to trial, why not take your best chance?

I know you think it’s nuts to say this at a traffic stop. I’m o.k. with that. They are your rights… do with them what you want.

3. No. No. Say it with me, “No!” This one can be a little bit tricky. The general rule is that you’re allowed to say “no.” You’d like to take a look around my car? No. Can you ask me a couple questions? No. You’d like to walk through my back yard? No. Can I come down to the police station to talk to you? No. Do I know where Jimmy Hoffa is buried? No, no, no!

“No” is tricky because there are some exceptions. Never use it if using it will be lying. Am I Matthew Haiduk? Saying “no” to that could get me in trouble. “No” can also be over-ridden. You might say they can’t come in, but their warrant says otherwise. What happens when a team of armed police are dressed in tactical gear, knocking on the door, telling you that they have a warrant and you tell them they can’t come in? Well, they’re about to knock down your door and hog-tie you anyway. What you say doesn’t really matter!

There is a very simple way to figure out of you can say “no.” If you are not sure whether or not you can say it, just scrap “no” off the list of things you’ll say to the police. Instead ask if you are free to leave. Then tell the police you would like to talk to your lawyer. It really is that easy.

2 thoughts on “Dealing with the police: My three favorite things to hear.”