If life were Star Wars, Hofmann would be Han Solo

Every once in a while things keep popping up in my life.  I don’t know if it’s for a reason, or not.  All I know is that I don’t like things I can’t get away from.

Over the weekend I decided to hop into the “way back machine” and put the music player on “random.”  On came Public Enemy’s once-popular song “Fight the Power.”  Man, I love that song.

The line from that song that stuck out in my head for more than 20 years is, of course, “Most of my heroes don’t appear on no stamps.”  Not for the grammar, though. Probably not for any reason more significant than the way it’s delivered in that song.  It’s still pretty cool.

So, I attack google to see what P.E. has been up to.   I knew they’d released another CD this summer, but it hadn’t clicked with me that it was titled “Most of My Heroes Still Don’t Appear on No Stamps.”  This got me to thinking.  What was once just a catchy little line is now starting to make a little sense.  I mean, when I was in High School, I probably hadn’t been alive long enough to have heroes who should be on stamps.  Now I’m a little bit older.

High School was over 20 years ago.  What about all that time having passed?  Has the Post Office put my heroes on stamps now?  Clearly they hadn’t put most of Public Enemy’s heroes on stamps in that time… or the new CD would have a different title.

So, I search.  Mario Andretti stamp? No.  Bryan Marchment?  No.  Sledge Hammer?  Absolutely not.  Every defense attorney who ever helped keep the government off my back… Gerry Spence, Ron Kuby or Clarence Darrow?  Not a chance.  Walter Payton? No.  Well, yes, actually, but that’s only one of my heroes and still not most of my heroes.

How do I start getting some proper stamps pressed out?

Then it gets weird.  I look at my twitter thing, and the NW Herald wants to hear about heroes.  They want to hear about my heroes.  That’s “hero” for the third time in a couple days. Maybe things do keep popping up for a reason.

This seems to be just the opportunity I need to get my heroes some recognition, right?

Boom.  I’m on it.  There’s a catch, though.  They want “everyday heroes” who live and work in McHenry County.  Andretti, Marchment, Hammer and Payton are out.  The defense attorneys?  Well, they are probably the most worthy, anyway.  It’s just going to have to be somebody local, and not somebody famous.  Maybe somebody who is local who should be famous?

There are a bunch of guys who regularly work in McHenry County who I could have nominated.  I chose Dan Hofmann, though.  Why?  For a couple of reasons.  Mostly I know how hard he works, I know how much he loves this stuff, and he just won that huge case in Rockford.  Plus, if the Herald bothers to call him, I know he’ll be direct, honest, and fun.  Who doesn’t like that?

I also know that there are  bunch of people who will step up and tell the Herald how much better their lives are because of Dan. 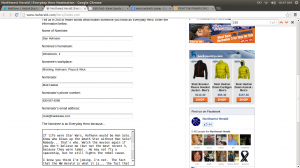 If life were Star Wars, Hofmann would be Han Solo. Know who blows up the Death Star without Han Solo? Nobody… that’s who. Watch the movies again if you don’t believe me (but not the most recent 3, because they were lame).  He may not fly a spaceship, but he still fights the rebel cause.

I know you think I’m joking. I’m not.  The fact that the NW Herald is what it is… the fact that Gus Philpot is what he is… that’s just not because “America is free”.  That’s because America is supposed to be free, and Dan Hofmann is out there every day acting like a “check” on the government when it tries to make America less free.

I love my freedom.  Do you love yours?  I know that you do.  You know who else loves your freedom? Dan does.  He’s an everyday hero.

I don’t see how Dan can’t be one of their “everyday heroes” after that.  So, now I can listen to Public Enemy without the burden of knowing I’ve never done anything to get anybody on any stamps.  I know the local paper isn’t exactly a stamp, but at least I took a little step towards getting somebody recognized for something.  I’ll let you know how that turns out.