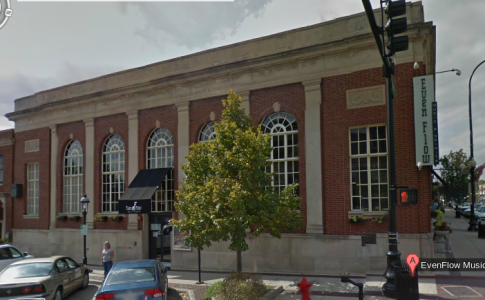 You knew Jenny McCarthy lived in Geneva, right?  If you didn’t (and you should have) you know now.  She’s been around a while.  She even posted some Swedish Days pictures on twitter earlier this year.

Now she’s been associated with some of the cities biggest scofflaws.  How do I know that?  There’s not exactly a lot of crime in Geneva. But, it seems that she had a party the other night and a lot of her fancy California guests got busted.  From the Kane County Chronicle:

GENEVA – A night out with Hollywood stars at a Jenny McCarthy charity event ended with tickets for public intoxication for some outside a nightspot in Geneva, records show.

McCarthy’s event, which took place Aug. 24 at the Hotel Baker in St. Charles, raised money for Bridges Montessori Academy in St. Charles. Among those cited were actors and dancers.

Then, at about 12:30 a.m., Aug. 25, 30 to 40 guests came with McCarthy to EvenFlow Music and Spirits, 302 W. State St., Geneva, according to Michael Knuth, who, along with Nicholas Mercadante, owns the bar, dinner and live music venue.

“It was a very nice night,” Knuth said. “Jenny invited her guests from Baker Hotel. She was very nice and enjoyed music and spirits.”

Knuth said the last call for drinks was 1:50 a.m. The guests did not drink any alcoholic beverages in that time, he said, because it’s against the city’s liquor code to serve alcohol between 2 and 6 a.m.

“They were not here at 5 a.m.; they were outside waiting for a cab,” Knuth said. “I don’t know how long they were waiting. Who knows where they went or what they did, but as for me and my bar, they were not drinking.”

Oddly enough, the police reports seem to give a different version of events:

According to reports, Joanne McCarthy told police they arrived at EvenFlow at 1:45 a.m. for an after-hours party and they drank alcoholic beverages, up until they went outside, right before police arrived at 5:45 a.m.

Also according to reports, Monaco was belligerent to officers at times, and “repeatedly stated she was a celebrity on the television shows ‘General Hospital’ and ‘Dancing With the Stars.’ “

The report states that Monaco’s demeanor changed when police advised her of the consequences of of her behavior.

Gault, a server at EvenFlow, told police she drank alcohol herself as well as served it to the group after the business closed.

According to police reports, Mercadante told police he admitted serving alcohol to the group until their departure at 5:45 a.m. because he wanted to “accommodate some ‘famous’ people and made a poor choice for his business.”

That last version of events tells me a couple of things.  First, EvenFlow could be in a lot of trouble.  Whatever good benefit they may have received from being the place that Jenny McCarthy parties at might very well get wiped out by a liquor license suspension.  Second, people need to do a better job of reading what I write when it comes to dealing with the police.  Your friends (or the people you think are your friends) will always rat you out- just ask Lance Armstrong.