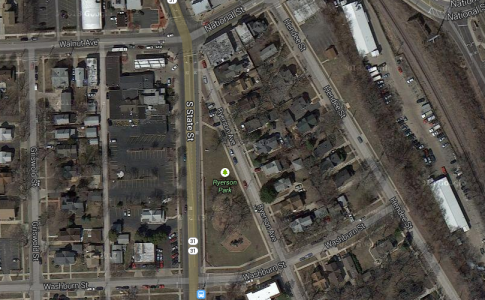 Ever wonder why there is any “extra prohibited” distance whatsoever?  I know that while sitting in your lay-z-boy, watching A-Team reruns and sipping on Diet Mountain Dew in the comfort of your living room it makes perfectly good sense-  people peddling drugs “close” to schools and parks are more likely to endanger kids.

All that sounds kosher from the comfort of a reclining chair is not necessarily true, though. If it were, then why would the cops go out of their way to set up buys within 1000 feet of a school or park?  If it was truly that much more dangerous to the kids, the narcotics units wouldn’t be trying to lure the drug dealers there, right?  But, they do. All the time… for the “bigger bust.”

For the sake of discussion, however, let’s pretend the Elgin cops don’t care about the safety of kids at schools and parks and are willing to go out of their way to tell drug dealers to meet them by schools and parks.  We all know it would never happen, but the 1000 foot rule still doesn’t make sense.

1000 feet is an important number because it has a lot of zeros, or something.

Take a look at this map. It’s the area around Ryerson Park in Elgin– the park mentioned in the Kane County State’s Attorney’s media release.

For my own amusement, I went to a google maps distance calculator to see exactly where 1000 feet might be.  The entire area you see is within 1000 feet.  In fact, to the ENE of the park, there’s a fairly thick treeline separating a small industrial area (metal/grey roofs).  Behind them is a parking lot, then train tracks. Just past the tracks (and off the picture to the east) is the Fox river.  The 1000 feet goes out into the Fox River.

Two guys sitting in fishing boats in the middle of the river exchanging money for narcotics are probably engaged in the most out-of-the-way, non-threatening, inconspicuous, “safe” drug sale imaginable. Not only are they likely not a heightened threat to kids, they’re not a heightened threat to anybody.  They are separated from the park by half of a river, a raised rail-road grade, a parking lot and industrial area, a thick row of trees and two rows of houses.  There’s no way  they are a threat to the park, or anybody randomly walking to or from the park.

By the same token, the city of Elgin is full of places that aren’t schools and parks but where kids congregate to play or hang out.

None of that matters, though, unless they are within 100 feet of a school or park.  Seems rather random, no?

I know it’s easy to be completely unsympathetic to the drug pushers of the world and say that it really doesn’t matter because nobody should sell drugs anywhere and they all deserve the maximum penalty.  That’s fine- then change the law.  Get rid of the 1000 feet and make it mandatory life for anybody if you feel so strong about it. Then start paying 80% state income tax to show us all how strongly principled you are in wanting everybody incarcerated for life.

The reality is, though, that 1000 feet is an arbitrary number meaning no more than 1400 feet or 750 feet. What would be less arbitrary would be to identify the areas in a city where kids actually congregate (which, I know, takes a lot more pesky thinking than just pretending every park is always filled with kids) and then highlight the sidewalks and streets that the kids take to get there and make those areas off-limits. You know… have the law conform to reality a little more.

Of course, none of this matters if you don’t pass a law keeping the cops from going out of their way to initiate drug transactions in these areas.  Until you do that the kids will never be safe and the rest of it is really a waste.