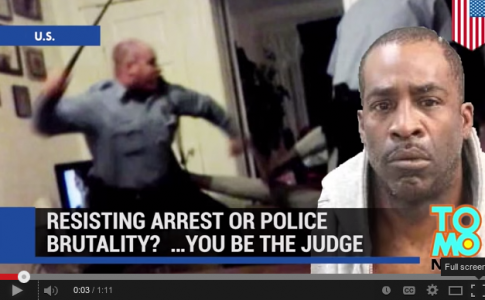 I think I’m developing a reputation as the guy who doesn’t like it when the mentally ill or disabled get beaten.  At least it looks that way from the news stories my friends send over.  It might have something to do with my thoughts on that poor dude with downs syndrome who the police killed because he wouldn’t leave the movie theater.  Or the mentally disabled man that the police in Michigan made sing and dance like a chimp. Or the old man with the cane that the Park Forest cops killed. Or… you get the point.

I’m not going to re-hash everything I’ve already said about what is quickly becoming a cop-versus-the-weak epidemic.  I’ll just say, though, that the more we want our cops to act like the military, the less patience and more force they seem to be willing to exhibit towards the mentally ill. The police are trained to take control and exert their authority over any and every situation… not to wait for the man with downs syndrome, or the old man with the cane, or even the dog running loose to calm down.  Beat and kill first, it will all be justified in the end, right?

That’s why I say it’s an epidemic- there are too many cop-beats/batters/kills-disabled-man stories for me to deal with.  Sometimes I don’t even bother opening them because I find them so disturbing.  Tonight, after The Boss turned on Sale of the Century or whatever it is she’s into watching these days, I flipped back through some of the links people had sent.  I could use something to rile me up a bit.

I got as far as this video depicting the police “interaction” with Mario Crump.  Mr. Crump is a man who suffers from schizophrenia and bipolar disorder– two things that, no doubt, can make him a very difficult man to deal with.  Mr. Crump’s family was, apparently, struggling to deal with his bad mood and called the police for help.  When they arrived, it looked like this:

I’m having a hard time with this video.  I know, I know, I know… it’s impossible to know what happened before the camera turned on. So, I’ll go ahead and assume that before then, Mr. Crump was doing something to justify the beating he was getting.  Maybe he had just swung at one of the cops, or, even worse, tried to grab a gun.

Where it starts to go really off the rails, though, is about 7 seconds in.  Where there’s that big pause, and Crump is sitting in the chair.  Then he gets beaten for seemingly no reason and told to, “put your hands behind your back, motherfucker.”

Why did the officer “re-engage” (that would be a word they’d use to describe it in a police report… I’d prefer to stick with “beat”) Mr. Crump there?  And where are the crisis workers helping the cops through this?  Where is the cop who has a background in social work, or psychology or helping the mentally ill telling the others to back off for a sec and trying to talk Mr. Crump down?

I’m not saying that this officer is a horrible man. I’m saying the same thing that I said last time I wrote about this- for the most part the police are acting how we trained them to act. They’re acting consistent with the taxpayer-funded academies we set up to train them. Our tax dollars tell them to act like everybody is a threat, not like everybody might be mentally ill.

Look at that video, or any of these stories again. Where is any single problem solving technique that you or I would be required to try before beating somebody?  Why does force trump patience?

We, the tax-paying public, don’t value that. We value police forces that creep around in armored cars. If we didn’t, we’d be putting more mental health professionals on police forces than we’d be putting armored cars on the streets… because the odds of a patrol officer bumping into somebody with bi-polar disorder is about a billion to one more likely than that officer bumping into a terrorist.

So, these stories will keep popping up. My friends will keep sending them to me. Every couple of months, I’ll get annoyed enough to write about one, and so life will be.