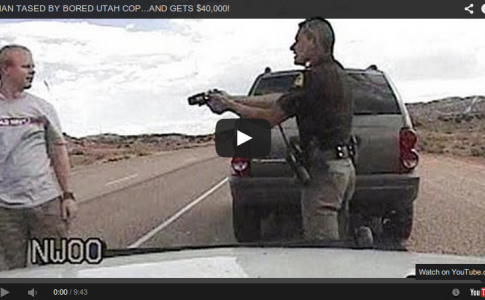 Electrifying news from the Cary, Illinois police department! For the cost of only about ten thousand taxpayer dollars, seven of the officers are going to be armed with tazers. According to the Northwest Herald:

CARY – Police officers in the village will soon be carrying Taser.

The village’s police department plans to equip officers with the electronic control weapons. Adding the additional level of use of force is set to cost the village about $10,750, according to Police Chief Patrick Finlon.

After training, the department will have seven units. The costs also include the battery packs, holsters and data packs, among other things.

This quote from the Cary police chief gave me the biggest chuckle, though:

The use of [electronic control weapons] has become an industry standard and with a properly developed policy and training in the area of tactics, court decisions and policy, the introduction of ECWs can reduce the possibility of injury to both law enforcement and offenders and thereby reduce exposure to the municipality,” Finlon wrote in a village memo.

That’s definitely true.  There’s a flip side to that, though.  Tasers can also be used improperly.  They can be used to harm people who otherwise wouldn’t be harmed with “traditional” policing.  They can be used by officers out of frustration, without a real reason- like this cop who tased a man as a result of a traffic stop (and subsequently cost his municipality another $40,000 plus whatever defending the lawyers cost in a law suit):

(the electrifying action comes just after the two minute mark)

I watch that and I wonder just what would have happened if that officer didn’t have a taser.

A few years back, over the course of a single month, I represented two men who had been tasered by the same department.  Both incidents stemmed from traffic tickets. In one, the man getting ticketed refused to hang up his phone and the officer got frustrated.  I seriously doubt either of them ever threatened harm to an officer. I also doubt either of them ever would have had force used against them if the officer didn’t have a taser.  Tasers seem to be the preferred method of dealing with annoying people that otherwise might not be subjected to force.

That’s not to say that tasers don’t have their uses- clearly they do.  It’s just that they seem to be over-used because they usually aren’t lethal.  Of course, sometimes they are.  And, when that happens, they cost the government tens of millions, not ten thousand dollars.

Hopefully this won’t be an issue in Cary.