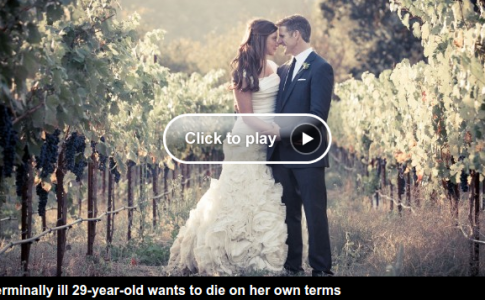 Update: 10/30/14- Brittany has a new video out. You can find it here with less commentary than appears in this post. Although, there is still some commentary… because Illinois’ regulation of death is still nonsense.

Isn’t there some sort of saying about how dreams do come true? Maybe not right away, but eventually? Sadly, I think that today is “eventually.”

Back in 2011 I wrote a moderately sarcastic (for me) post about what I wanted to see out of the world in 2012.  Titled, “A look ahead to 2012: How about less Lindsay Lohan (or Sam Hurd) and more physician assisted suicide.”  The post was aimed at mocking the recent crime news and wishing for a return to when there were more pressing news stories of public concern.  It was a smashing success that earned three “likes” on facebook and one twitter mention.  The crush of publicity was hard to live with, but I managed.

Of course, that “dream” didn’t come true until late 2014.  Yesterday, I stumbled upon an opinion piece on the CNN web page.  It’s written by Brittany Maynard who, at 29 happens to be both recently married and recently diagnosed with brain cancer.  It’s difficult to read:

(CNN) — On New Year’s Day, after months of suffering from debilitating headaches, I learned that I had brain cancer.

I was 29 years old. I’d been married for just over a year. My husband and I were trying for a family.

Our lives devolved into hospital stays, doctor consultations and medical research. Nine days after my initial diagnoses, I had a partial craniotomy and a partial resection of my temporal lobe. Both surgeries were an effort to stop the growth of my tumor.

In April, I learned that not only had my tumor come back, but it was more aggressive. Doctors gave me a prognosis of six months to live…

After months of research, my family and I reached a heartbreaking conclusion: There is no treatment that would save my life, and the recommended treatments would have destroyed the time I had left.

I know I joked about my “dream” of less Lindsay Lohan news and more real issues came true but there’s nothing funny about this story. Or the accompanying video:

I happen to prefer less government over more government- this much is obvious if you’ve read more than six words on this page.  From a strictly legal and philosophical perspective, if there’s anything that a government shouldn’t regulate it’s how a person chooses to say goodbye to this world and hello to the next.  At least that’s how my worldview looks.

I get the religious objection. I was raised Catholic- live your life the best you can, and let God take care of the life-and-death decisions. I respect that. Even if you’re not Catholic, I respect whatever your religion says about throwing a fork in the end-of-life road.

That doesn’t mean it should be a matter of criminal law, though.  Religious morality and criminal regulation need not be synonymous.  In fact, they never will be unless the entirety of this country settles upon worshiping the same deity and reading the same religious texts.

I also understand the physician’s point of view:  They’re supposed to be saving people and advancing medicine.  Putting them in the middle of these decisions not only seems potentially contrary to that but also puts an option on their table that will complicate every decision they make.

I won’t say those aren’t legitimate concerns.  I will say, though, that those aren’t concerns when it comes to defense attorneys.  Nobody ever says the death penalty should be outlawed because it’s not nice to put defense attorneys in a position where counsel to their clients and decisions they make at trial may directly contribute to the life/death of that person in the chair next to them.  Nobody cares in that case.  We need to protect the doctors, not the lawyers, right?

Even though I feel for the physicians, I don’t think that’s a justification for criminal penalties.  Just like with religion, guidance over difficult medical decisions and criminal law need not be synonymous.

Of course, if you read about Brittany, she’s moved to Oregon because writing the end of her own story is not a crime there.  Dying is not outlawed. Or, at least, it’s less outlawed.

In Illinois, we’re not so lucky.  Dying is regulated.  Hopefully Brittany can find peace when she needs to.  Sadly it can’t be here.