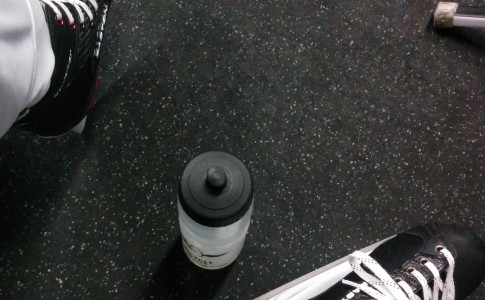 I’m going to let a little secret out here: I play hockey. It’s not a very exciting secret, I know. It probably shouldn’t even be a secret.  It is, though. You know why?  Because I play hockey poorly. Like, really bad.  I’m at the bottom of the talent ladder on a hockey team that’s at the bottom tier of a bottom league at the rink.  We’ve got some good skaters, too.  We still don’t win.  It’s not their fault. Know what I’m saying?

I feel better having that out there.

I don’t feel better reading about this guy that got busted for DUI while driving the zamboni between periods of a high school hockey game:

“While the teams took a break for intermission, the driver of the ice resurfacer was weaving around the ice “erratically” and bumping into the boards. After police were called to South Sports Arena, 27-year-old Steven Anderson, a six-year seasonal employee for the Fargo Park District, was arrested for a suspected DUI. He was charged and released on bail Saturday morning.”

Look, this is silly. Arresting that guy, I mean. Normally I say things like this, and I’m just popping off at the mouth. I don’t even know what I’m talking about.

Not this time. This time I’m talking about something I’m an expert on. I play Hockey, dammit. I can be an expert even if I’m bad, right?  I’ve seen lots of people do lots of zamboniing.  I’m not scared of drunk zamboni man. Not even a little bit.

We’ve Got An Epidemic On Our Hands. WHAT ABOUT THE CHILDREN?

I might even be willing to bet that the dude who wrote the song about driving the zamboni was drunk when he dreamed up the song.

If drunk zamboniing is such an epidemic, we need to lock these guys up and throw away the key, right? Get them out of the rinks and keep the ice safe, right?  PUT THEM WHERE THEY CAN’T HURT THE CHILDREN, RIGHT!

Look, I’m not saying drunk zamboni man is somebody to look up to. I’m saying that he’s piloting that thing at about 4 mph, while completely contained by steel reinforced boards and tall plexiglass. He’s a danger to whom, exactly?  You know how the best place for drunk drivers is probably in a bubble that contains them to themselves, and that they can’t drive out of?  Drunk zamboni man is already there.

Ever see what happens when a Zamboni runs too close to the boards and hits them?  I have… because I’m an expert.  It does this crazy thing. It just slides its way merrily along.  It doesn’t poke holes in the boards. It doesn’t run through the boards and kill people. It just keeps on keepin’ on.

Should zamboni man get fired? Yeah. Should he lose his zamboni pilots license for a bit? Sure. Should he be publicly humiliated? Probably not, but I won’t be too put off if you say he should.  Should he potentially lose his license to drive a car and face huge monetary fines?  Come on, now. That’s just silly.

Nearly three years ago I wrote about how our zero-tolerance DUI mentality actually encourages people, who otherwise might want to pull over, to stay on the roads while drunk.  I’m sure that post will be the first thing to “haunt” me when I run for town dog catcher and somebody wants to try and discredit me as a soft-on-zamboni-crime lunatic, but I stand by everything I posted then.

I still stand by it now. The DUI zero-tolerance laws need to be re-worked with something less fueled by emotion than ration and reason.

3 thoughts on “Here’s Your Zero Tolerance on DUI: The Zamboni Guy Is In Jail. Happy now?”