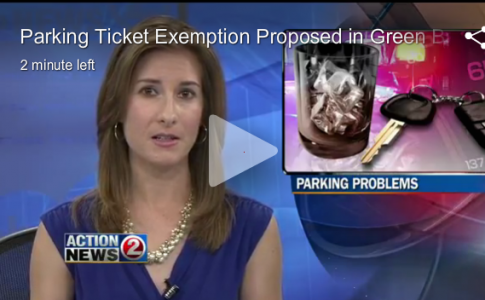 I’ll be intently following the political future of Randall Scannell in Green Bay. I know zero about his political beliefs or party affiliation. What I do know about the man, though, I like.

Law and politics are, sadly, too much like Philosophy- lots of people with strong opinions sitting around in a room talking about what should (or will) happen in the “out there” world if everybody in the world acted (or was forced to act by passage of law) in the way they wanted. “Cut taxes and nobody will starve.” Or, “raise minimum wage and nobody will starve.” Whatever it is, laws often get passed on these theoretical discussions without any real follow-up of what the actual practical outcome is.  Especially when it comes to criminal laws.

There is really no review of criminal laws.  Our code is fraught with laws that were passed for one reason, but now are either largely unused or used in ways that are opposite to their original intention (like, say the law that makes battery a felony if a person is “wears a hood, robe, or mask to conceal his or her identity” and was, I suspect, passed to toughen laws against racial-motivated lynchings but seemingly now applies more often to minorities in non-racially motivated crimes).

Rarely a year (or five, or ten) later does anybody look at a criminal law, match up how it’s actually working with what people said it would do, and see if the two are even remotely close.

Anything You Can Do I Can Do More Tough-On-Crimeish

The path to elections doesn’t start with telling the electorate that you want to look into the laws already on the books and figure out what is and isn’t actually working. To the contrary- the path to elections starts with stomping your feet, declaring you’re “tough on crime” and talking about how the criminals are getting off easy. If your opponent has already done that, you just stomp a little harder and yell instead of talk.  Stomping your feet the hardest while yelling the loudest about how “tough on crime” you are wins more elections than reasoned and objectively thought out laws.

Sadly, pragmatic lawmaking should trump political grandstanding every time.  It doesn’t though.

Drunk people not driving cars is better than drunk people driving cars.  I’ve written on the subject plenty of times before but our DUI laws are an extremely messed up mix of laws that are the product of political foot stomping and an un-reasoned attempt to keep people off the road.  The current laws and incentives (especially as offered by the Alliance Against Intoxicated Motorists) prefer a DUI arrest over keeping a drunk driver off the road (See: Why do police let people drive drunk or Drunk Driving Laws Increase DUI).  That is to say, it looks better on paper to say “we took 100 drunks off the road” than it does to have zero DUI arrests at the end of the year (even if by virtue of aggressive anti-dui programs).  Arrests are easy to quantify and spin into stump speeches.

Of course, if we changed that system, every once-in-a-while we wouldn’t be able to arrest the zamboni driver for DUI.  Just imagine the horrors if that Zamboni driver didn’t get arrested, subject to losing his license and possibly going to jail? It starts with letting one Zamboni driver “get off” and ends with ISIS moving into your house, I suppose.  The whole world would go to hell.

We need rational laws less than we need the world going to hell, politicians stomping their feet, and drunk drivers “getting out” of parking tickets, I guess.

That’s why I love Scannell’s move. It encourages people to use a designated driver. It encourages people to get a room, or walk to a nearby friend’s house. It encourages drunk people who have already made one mistake (getting drunk with their car in a bad place) to not make a potentially grave mistake by get on the road to move their car. It’s the kind of law we need more of in Illinois. Of course, stomping your feet and talking about how you’re going to pass a law where drunk people get to “park for free” never got anybody elected. Not here, anyway.

There is, however, a potential downside to Scannell’s change.  What if somebody looks at this change in law in one or five years, and it looks like it’s having no effect on DUI?  Then the city will be out all the parking revenue, and we’ll be stuck with another law passed on the back of theoretical debate and nothing more. Then what?

Then you just change the law back. It’s not hard, really.

3 thoughts on “Actually preventing DUI is the goal, right?”