Today I want to talk to you about Ketchup. And Cocaine.

This miscellaneous rambling is spurred on by this terrible tweet from the US Attorney’s office:

The U.S. Attorney’s office is very proud to announce the United States Government has acquired a BILLION dollars in cocaine before it was unleashed upon an unsuspecting public. Good for them. Had our war on drugs not driven up the price of narcotics so much, it’s very doubtful we could brag about such expensive cocaine. So, good for us, too.

If I were to buy a personal-use amount of ketchup to use, personally, it wouldn’t be much. I can get a 31 ounce bottle of Heinz Ketchup on Amazon right now for $3.48. 31 ounces is a good amount. A bit for me, and maybe a little for my friends if they happen to be around.

That comes out to a little over 11 cents per ounce of ketchup. Not bad to soothe my ketchup habit. I’ve developed an affinity for ketchup and actually met others who love ketchup, though. I got a guy. He can get me more ketchup and that will last me a little longer. Since I know and trust him AND because the per-ounce price is a little better, I’d rather get it from him when I can.

His name is Walmart, and the street value of his ketchup comes out to about 6 cents an ounce. Nearly half!

I probably shouldn’t know what I’m about to tell you, but I do and I’m going to share it with you. I know where everybody is getting their ketchup. They’re getting it from wholesale outlets- and they’re getting it cheap.

There is no street value to 60 gallons of ketchup. There’s only wholesale value. And that wholesale value is A LOT lower per-ounce than the personal use bottles I buy.

Ketchup is gross, though. In reality I don’t even like it. I don’t want to buy it in 16 ounce, 31 ounce, or 60 gallon lots. The per-ounce value to me is even lower than what Amazon gets for it… which means I hardly every buy it (but likely pay more per ounce when I do).

Some people love it though. I’ve heard there are even disgusting people who put it on bratwurst. They probably also have friends who love it and probably even have parties where people get together and use ketchup in groups.

Those people probably buy ketchup in bigger batches than I. They probably pick some up for their friends when they get it. Because they’re passing it around you might call them ketchup dealers, although I don’t think they’re ketchup “dealers” any more than a person who buys a round of beers at the bar is a beer distributor.

Those ketchup power users are going to pay less-per-ounce than I am because an ounce doesn’t last them as long and they don’t want to buy it (for them or their friends) every day. So, they buy in bulk but they still aren’t buying wholesale.

The street level cost of “an ounce” of ketchup is really hard to accurately pin.

But we’re not talking about Ketchup here, we’re talking about how there’s no way that cocaine bust was actually a billion dollars of coke. 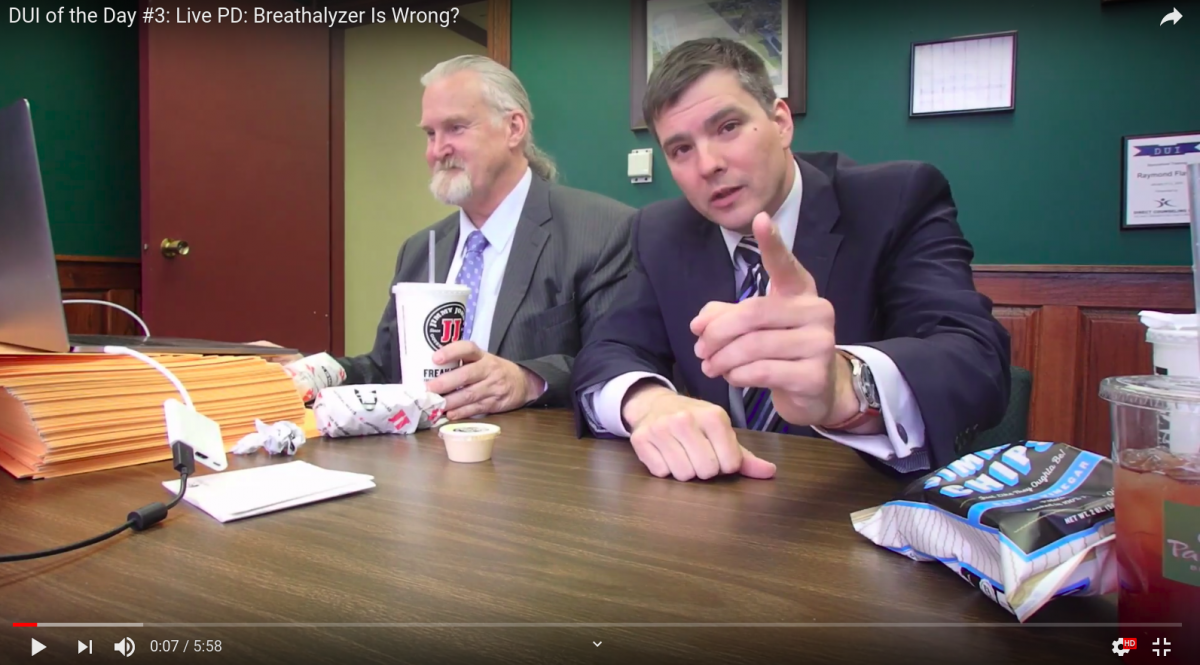 What started as a bit of a not-for-public-consumption test video that The Boss decided to put on Facebook (I don’t know why) has “evolved” into two guys spitting Jimmy Johns at a computer screen while yelling about breath tests being inaccurate. (But don’t fret, the test video is still on there).

Defense Lawyers Watching Videos is, unfortunately, here to stay. It should probably be renamed (“I see ‘not guilty’ everywhere,” or “Please. Don’t. Do. That. Test…. ARGGGHHH” might be better names), but we’re stuck with that for the time being.

Until then, grab yourself a sub and feel free to watch the nonsense. 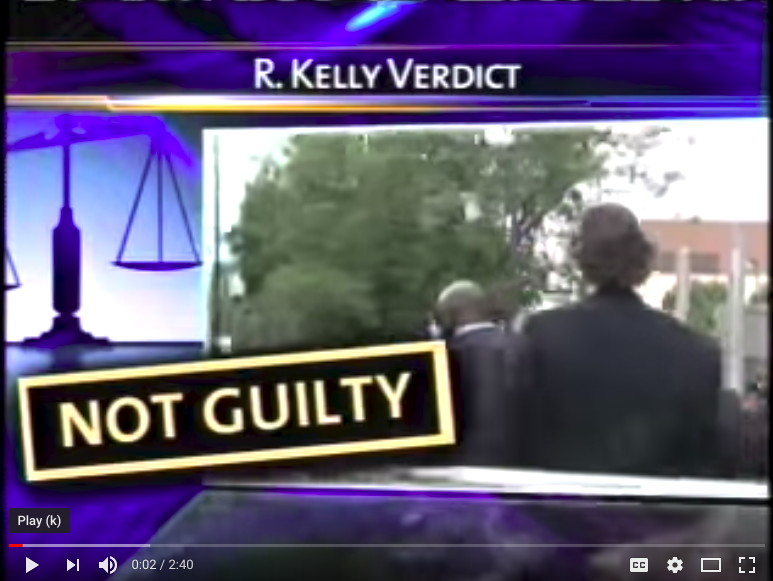 Here’s what I know about R. Kelly’s arrest:

He’s charged with several sex crimes. He posted bond. I don’t really know anything beyond that. I don’t need to.

Illinois law is so compromised when it comes to sex crimes that he won’t receive a fair trial. Maybe you don’t care because you watched Surviving R. Kelly and believe he needs to be in prison. Maybe you’re not concerned because you think he skated on the charges in his prior legal battles. Maybe, just maybe, you aren’t worried because you heard “The Remix To Ignition” 100 too many times. I don’t know.

I also heard “The Remix To Ignition” too many times. I also don’t care about R. Kelly.

What I do care about is that a lot of people without R. Kelly’s baggage get wrapped up in the same system as R. Kelly and they’re not all guilty. That should frighten you- you could be one of them.

If you are, here’s why you won’t get a fair trial either:

When you’re charged with a sex crime in Illinois one of the first things the government does is move to admit “other crimes” pursuant to 720 ILCS 5/115-7.3. This means that prosecutors won’t just be putting R. Kelly on trial for what’s in the complaint- they can attempt to use any or every other person who has made allegations against him at trial.

That means that any or all of those women from Surviving R. Kelly could possibly be testifying in a trial that has nothing to do with them.

If R. Kelly had been charged with a non-sex-related crime the government could not do this. It’s considered so prejudicial that it prevents a defendant from getting a fair trial. We don’t care about fair trials for sex cases in Illinois. We care about convictions. That’s not scary when it’s R. Kelly in shackles. It’s usually not R. Kelly in the shackles, however.

The prosecutors will also move to get hearsay statements in through 720 ILCS 5/115-10 if they can. 115-10 allows hearsay from the purported victim to come into trial if the victim was under 13 (or mentally impaired) when the offense occurred.

Prosecutors absolutely love 115-10, especially in delayed reporting cases. It’s hard to cross-examine hearsay. Especially so if it’s years old, vague, and lacks any details that might be corroborated. Those statements are, however, routinely admitted into evidence for sex cases.

The same hearsay doesn’t come in for non-sex-related cases. If R. Kelly was charged with murder, terrorism, or selling 492 tons, of cocaine the hearsay of witnesses and victims is unreliable. In sex cases it apparently is reliable.

I Believe I Can Fly This By the Jury and They Will Buy It.

If the government really wants to maximize its edge, prosecutors will also file a motion to use an expert to testify about an “accepted form of post-traumatic stress syndrome.” Prosecutors are allowed to call this “rape trauma syndrome” or “child abuse accommodation syndrome” to ensure they can maximize the prejudicial effect.

The real advantage there is that the law does not require the “expert” to have diagnosed, examined, or even have talked to any possible victim. Illinois law doesn’t even require the victim to have an “accepted form of post-traumatic stress syndrome.” We just have an isolated law that says it comes in at trial.

Since it’s R. Kelly’s trial, nobody will care if a random “expert” starts talking about “rape trauma” in the middle of the trial (even if no victim has been diagnosed with “rape trauma syndrome”). People would surely care if you were on trial though, right?

The single greatest reason R. Kelly can’t win is the Drew Peterson effect. Peterson was so annoying that we rooted for his imprisonment simply so we’d not have to see in the news again. Consequently he was subjected to a process that only became more tilted after it began.

Once Drew Peterson was charged with murder, Illinois lawmakers changed the law to make it easier to convict him.

The changed law, dubbed “Drew’s Law” eliminated a legal barrier (aka “right”) that prevented prosecutors from admitting certain (previously considered) “unreliable” evidence they wanted to admit. It worked, too.

Rest Assured, We Will Convict!

There you have it. R. Kelly is going to go to prison and you heard it here for the 6,234th time. If you’re worried he might not, don’t be. In Illinois we’ve changed several laws to make it easier to convict people charged with sex offenses than just about any other crime. When we’re done with R. Kelly, we’ll get back to using the same system on people like you.