People think the law is a science. Like, there are black-and-white rules that control everything. And that every situation is repeatable. For instance, I often get asked how to avoid getting arrested for DUI. You would think the answer is simple, right? You can drink. Or, you can drive. You can’t drink and drive, though.

Unfortunately, it’s not that simple. Plenty of people who are stone-sober have been arrested. A million innocent things might cause the police to believe you are driving under the influence. Think I’m making this up? Put 5 minutes of research into the similarity between diabetic shock and DUI. Or just watch this:

So, I have no specifics to offer. I do have a few general rules to offer, though. They may be a bit unorthodox, but stick with me. It will all make sense in the end.

Simple Rule #1: Don’t be Canadian. This might not sound hard, but nearly 34 million people on this continent have got this one wrong. Why don’t you want to be Canadian? It’s simple, really. They don’t have a bill of rights like ours. Or, they couldn’t find their own bill of rights with a map and compass. The bill of rights is what keeps the police out of your life. In the good, old U.S. Of A we have a couple hundred years of enforcing this idea. In Canada, they still don’t know. Saying “Canadian Bill of Rights” is a lot like saying “Canadian Military” in casual conversation. It sounds like it means something, but nobody really knows what it is.

Simple Rule #2: It’s not your business. If you happen to be walking down the road one day and see the police “dealing” with somebody, it is not wise to stick your nose where it doesn’t belong. You didn’t see what happened before, you don’t know what is going on, and you don’t know where it is going. They will arrest you to get you out of the way.

That’s not to say that you should tolerate police abuse. Not at all. Sticking your nose in the middle of it is only going to get you arrested, though. You may be more effective calling the State Police (if your “interaction” is with the locals). There is also nothing wrong with video recording anything that happens in public (although you shouldn’t simultaneously record audio in Illinois). Either way, if your focus is to avoid arrest it’s best to avoid things the police are doing that aren’t your business… even if that may not be fun.

I believe in these rules 100%.  Like I said before, though, the law is not science. These two rules are good rules to live by. They may help many of you avoid arrest. There is always an exception, though…

P.S. Who is this guy to use “stranger” to describe another person?

Most misdemeanor drug cases start with a traffic stop. Many felony cases do as well. It make sense that the lawman would pull over a car for a traffic offense. What doesn’t make sense (to me, anyway) is that the majority of traffic-turned-drug stops are the result of people in the car giving consent to search. I would be a very wealthy man if I had $10 for every conversation at my office that went roughly like this:

Me: Ok. Then what happened?
Accused: The officer asked if he could search.

Me: What did you tell him?
Accused: I told them he could.

Me: Why did you tell him he could search if you thought there might be contraband in the car?
Accused: I didn’t want to look guilty.

The idea that people don’t want to “look” guilty is actually a bit disturbing.  Long before any of us were on this planet, the people responsible for founding our nation weighed in on searches by the government.  You know what they said about looking guilty?  Here’s what they said:

The right of the people to be secure in their persons, houses, papers, and effects, against unreasonable searches and seizures, shall not be violated, and no Warrants shall issue, but upon probable cause, supported by Oath or affirmation, and particularly describing the place to be searched, and the persons or things to be seized.

That, of course, is the text of the Fourth Amendment.  The drafters of the Bill of Rights didn’t think you would look guilty for refusing a search.  So, to whom do you think you look guilty?  The Police?  Guess what? He already thinks you’re guilty, that’s why he wants to search.

In many cases you have no ability to keep the government out of your life.  In everything from how long your lawn may be to whether you may put a boat in the water without registration, you don’t really have a “right”.  Unless there is a warrant, exigent circumstances, or some other exception, the Fourth Amendment says you do have a “right” when it comes to searches.  Americans pitched British Tea in the harbor and then fought and died for the freedom to painstakingly draft and ratify the text of the Fourth Amendment.  My experience is that people are a lot more willing to gloss that over in the face of a request from the local patrol officer.

The next part of the conversation re-enacted above has me talking to the person about their specific case, and what they should have or could have done.  I can’t give out general advice over the internet to cover each specific police interaction, so don’t even think about taking my musings here as advice for what you should do in your specific situation.  Doing so would be silly in light of the fact that I do fee consultations, anyway.  Just call me.  The best general advice I could give out is that if you ever get asked by the police if they can perform a search, it would be wise to call a lawyer for advice.  Right then and there. 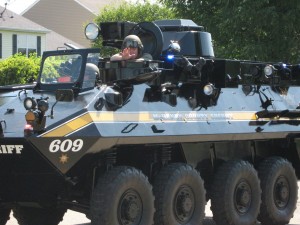