I’m hoping that somebody somewhere steps up soon and explains this stuff to me.  Even as an attorney I’ve never understood, and I still don’t, why normal people- people like you and I- are the least important people in criminal law.  Break my stuff? That’s bad. Break the government’s stuff?  That’s really bad, right?  Steal my stuff? That’s bad. Steal from a corporate retailer, though? That’s somehow worse.

On that note, I came across this little gem the other day.  Like the first link above, it talks about damaging property:

Sec. 21-1. Criminal damage to property.
(a) A person commits criminal damage to property when he or she: (1) knowingly damages any property of another…
* * *
(d) Sentence.
(1) A violation of subsection (a) shall have the following penalties
* * *
(B) A violation of paragraph (1), (2), (3), (5), or (6) is a Class A misdemeanor when the damage to the property does not exceed $300.
C) A violation of paragraph (1), (2), (3),(5), or (6) is a Class 4 felony when the damage to property does not exceed $300 and the damage occurs to property of a school or place of worship or to farm equipment or immovable items of agricultural production, including but not limited to grain elevators, grain bins, and barns or property which memorializes or honors an individual or group of police officers, fire fighters, members of the United States Armed Forces, National Guard, or veterans…
[/section_alt]
For those arm-chair attorneys not scoring at home, I went ahead and highlighted the nonsense part: the part where if somebody breaks your stuff it’s a misdemeanor.  Unless your stuff memorializes a cop or group of cops.  Then it’s a felony.

END_OF_DOCUMENT_TOKEN_TO_BE_REPLACED 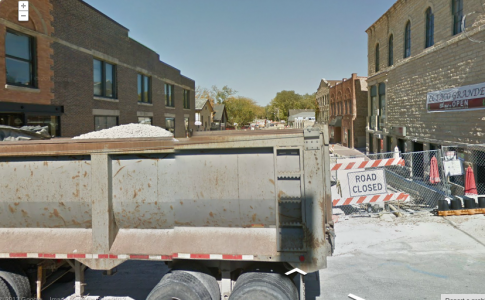 This article in the Kane County Chronicle caught my eye today:

I was interested for a couple of reasons.  First, “breaking stuff” (or “criminal damage to property” as the law calls it) is a fairly mundane, common crime.  If “breaking things” happens fairly often and the police tipped off the Chronicle that stuff was broken, there’s got to be more to the story, right?

I was also intrigued because Batavia has pumped a lot of money into the river lane area downtown (seen above… under construction).  From an outsider’s standpoint, it’s turned out pretty well.  I know there’s a bit of controversy over the money the city spent on the arch.  It’s not my money, though, so I’m fine with it.

In perusing Nicole Weskerna’s article, the it looks like the purported offense did occur in the newly-revamped section of River lane;

The incident occurred shortly after midnight on Friday, Oct. 18, in the 0-99 block of North River Street in Batavia. Police responded to a report of damage to the front door of a private business at 17 N. River St. Police found that a large cement garbage can, which was later determined to be property of the city of Batavia, had been smashed through the front door, states the release.

The garbage can had been rolled down the pedestrian stairs of the city parking deck located at State Street and North River Street prior to being smashed into the window. The damage to the city’s property included the garbage can,  as well as the stairwell on the parking deck.

Sadly, I’m not surprised.  The upside of the new development is that it’s drawing more people to that section of town. The downside, of course, is that more people means more opportunity to break stuff.

So, some guys throw a garbage can through a door, and you’re asking why I’m annoyed?  I’m annoyed because of the charges.  The two men each:

To the uninitiated, a Class 3 felony is more severe and carries a higher maximum (and minimum) prison sentence than a Class 4.  Here, the horrendous damage surely done to the city’s concrete garbage can is a Class 3 felony.  The damage to the private citizen’s door is a Class 4.

Why is the law written like that? I have no idea. It makes no sense.  Apparently their stuff is more important than your stuff.